Embroidery tale: An addition of personal embroidery on top of ceremony drawings and the Kibbutz collective memory

Layers and coats are a fundamental element in the work of Anna Mirkin, better known as Foma* from her street paintings throughout Tel Aviv. These are delicate, almost invisible layers, layers and coats of meanings, and work processes woven over the years. The accumulation of these layers, the multiplication, the reflection, the addition, and the condensation, make her exhibition unique.

The work takes place in Anna Mirkin’s meetings with Kibbutz Beeri’s community of members. Kibbutz Beeri is one of the last kibbutzes in the country, which still has community traditions and a collaborative lifestyle: equal distribution of the Kibbutz’s profits, eating three meals a day in the non-privatized dining room, which still constitutes the Kibbutz’s center of life, a central and lively meeting place for its residents. Communal holidays celebrations, solidarity, extensive welfare & health systems, and great emphasis on joint education, from infancy to the military.

The textile work in the center of the exhibition, a kind of collaborative quilt, is based on the artist’s drawings, inspired by photographs from the kibbutz archives. The pictures show the Kibbutz children wearing wreaths at the First Fruit ceremony during the feast of Shavuot. These ceremonies are held in Beeri to this day, traditions preserved from the early days of the Kibbutz. She also added drawings based on photographs from her meetings with the kibbutz members while working together on the exhibition. Anna Mirkin handles these photographs; she draws them in her familiar style, characterized by a thin, connected outline and a dash-shading. A texture that is also visible in the murals she created in the streets of Tel Aviv. The dash also corresponds with the lines of the embroidery thread.

From the drawings, she created triangles that were repeatedly doubled as a kaleidoscope till they became a repeating model. Anna Mirkin printed the model she created on fabric squares. At the embroidery meetings she initiated at the assembly hall, the “member Club,” and the gallery, she invited the kibbutz members – boys, girls, mothers, and old friends, to get involved in the model and add their own personal embroidery. An individual expression within the existing order, though she restricted them to a limited number of colors: brown, light beige, creamy white, and peach pink. This created another layer, a personal addition, which came on top of the first layer, which describes the community’s life, the collective memory of the place. The color restriction compartmentalizes the personal space, silences it, and allows it to blend pleasantly into the delicate print in very light brown colors. Finally, she sewed all the squares into one large sheet, like a cooperative quilt, characteristic of hand-craft.

During her visits to the Kibbutz, Anna Mirkin was fascinated by the Kibbutz’s social, communal, and traditional structure. In her previous works, too, she dealt with ceremonies, coming-of-age, and transition ceremonies created in communal and tribal settings. Societies that lead a collective life in the face of postmodern urban societies, which now attempt to restore the lost communalism. She sees the Kibbutz as a social structure,

which exists here and now and has a socialist and communal nature. Communal ceremonies play an important role; they are the connection between the community members, which expresses a partnership in time and place, a shared past, tradition, values, and ideology. In her work, Anna Mirkin questions the boundary between the private and the public in the Kibbutz, which is very clear to her in the urban space, and less apparent in the Kibbutz. The addition of personal embroidery by each participant comes as a second layer over the printed surface created by the artist, an individual personal layer above the collective first layer. (The exhibition name “Layer No. 2” can be understood as a second layer but also as a work in process: a continuation of her work “Layer no. 1,” that was displayed at the Gabirol Gallery in 2016. There also she invited different people to embroider on printed fabric squares).

The kaleidoscopic drawn image reappears in the installation of objects and furniture which were found in the kibbutz yard, which she wrapped in her prints and hung on transparent perspex in the gallery space. The drawing also penetrates the screening room; it fills with life and movement in the video animation she created. 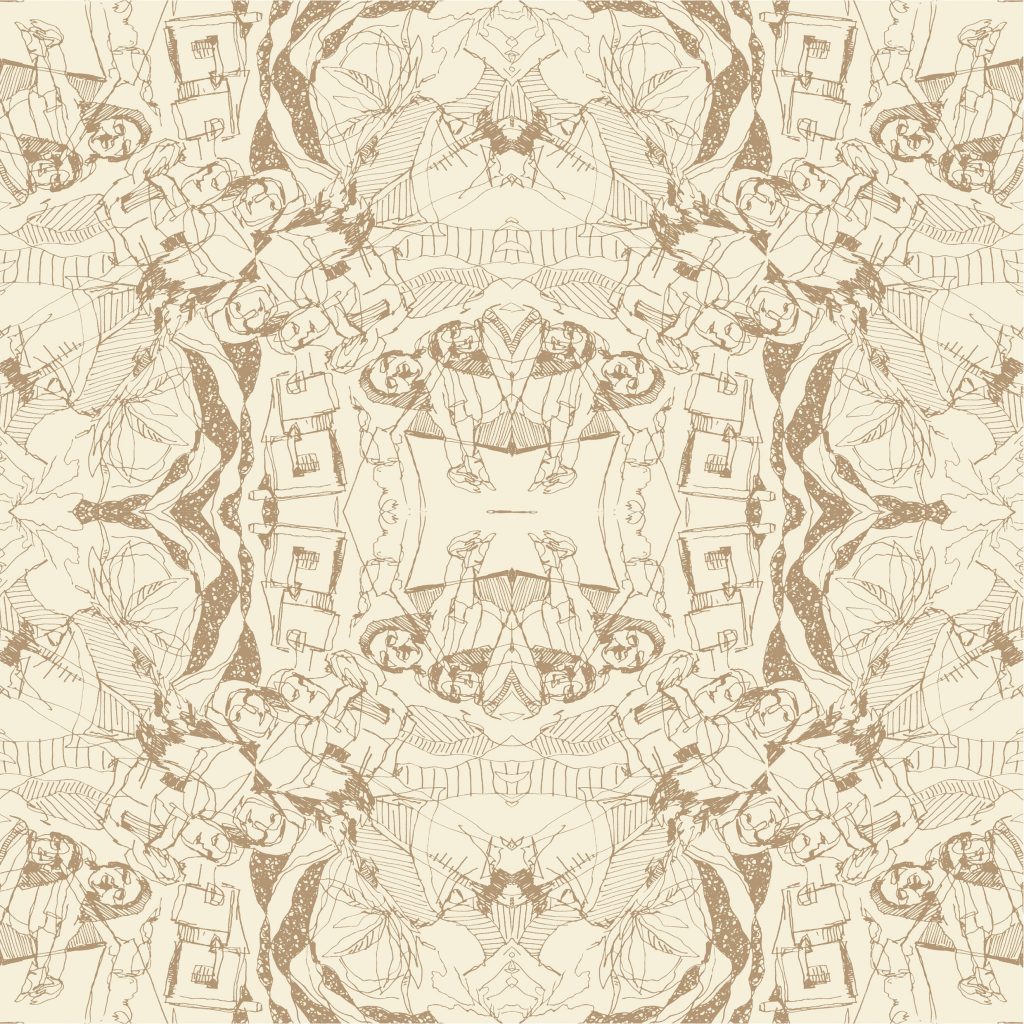 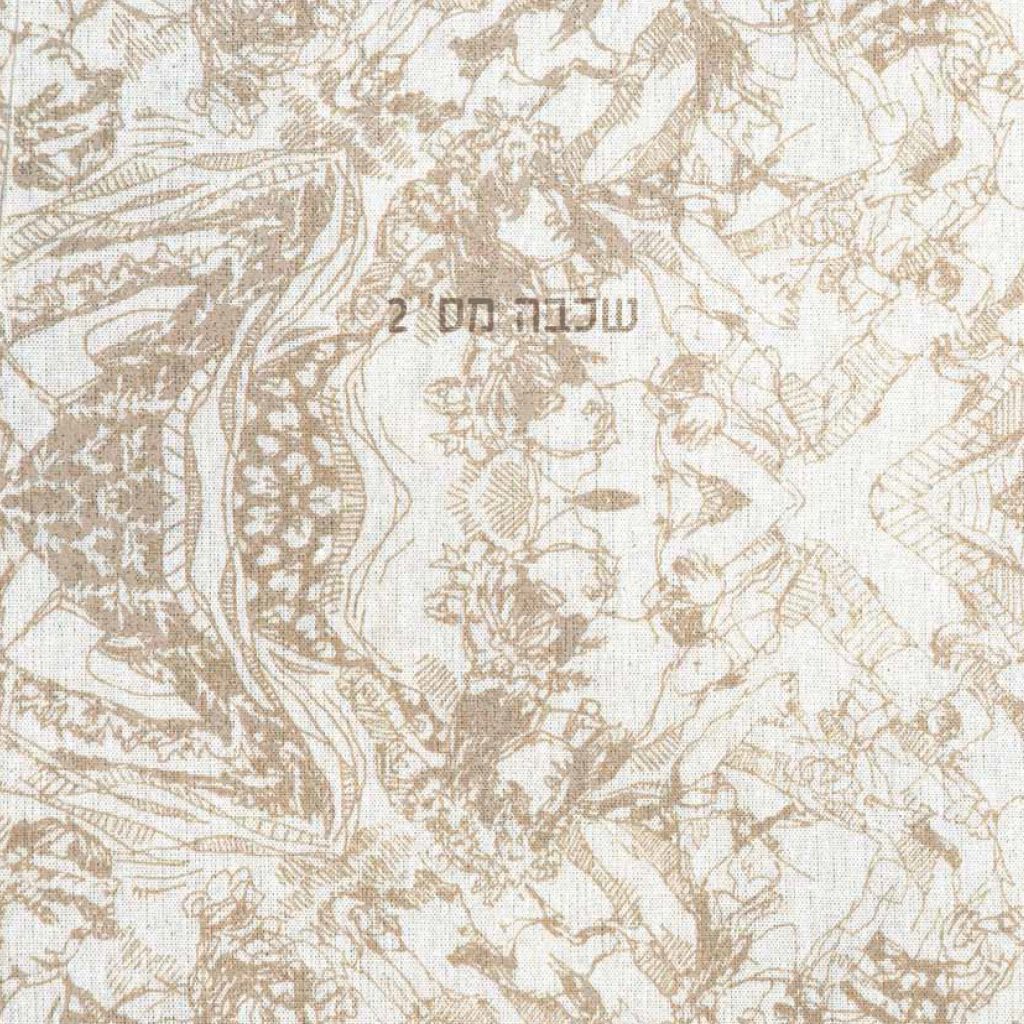 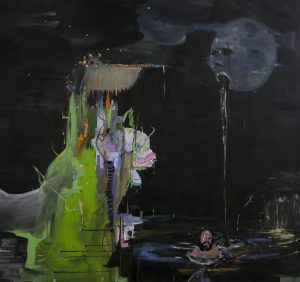 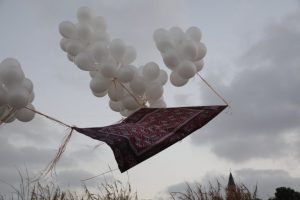